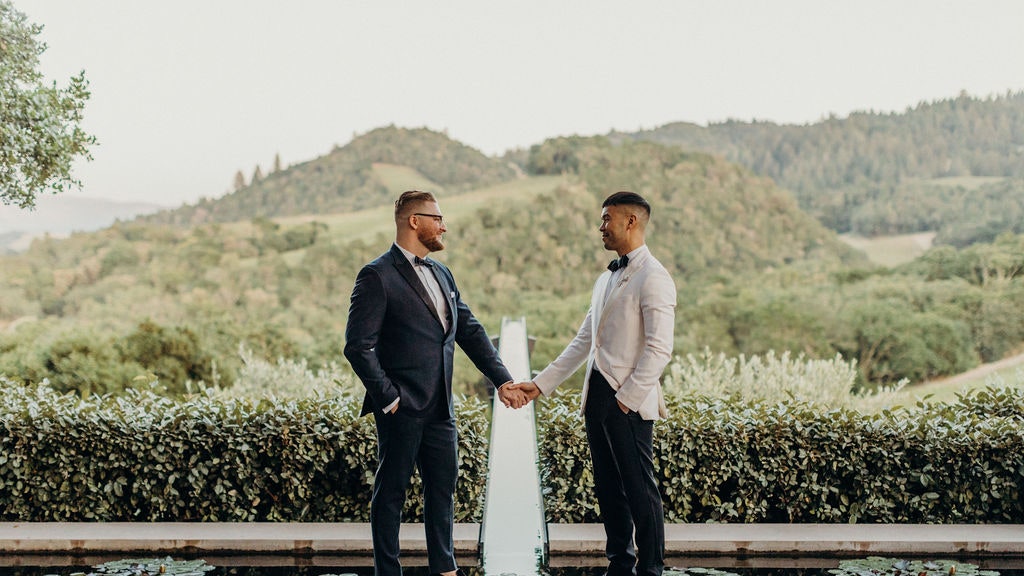 Lance Lin and Jared Levan first met when a mutual friend brought Levan to a barbecue Lin was hosting at his summer share house on Fire Island. “I happened to be on Fire Island for the day and ended up at Lance’s house,” Jared, an account manager at Impossible Foods, remembers. “It was my first time visiting Fire Island and it had been a last-minute decision to go…so happy I did!”

Six years later, Jared proposed right before Thanksgiving. “We wanted to take some time to ourselves,” remembers Lance, a senior manager in the communications department at Apple. “We decided on Palm Springs and spent our weekend at The Parker. “The last night, we had an incredible dinner at Workshop and then headed back to the hotel for a night cap.”

On their walk back to the room, Jared guided Lance in a different direction, away from their room. “While we were at dinner, he had the hotel staff move all our luggage into one of their Villas, so when I stepped into our new room, all I remember is seeing a bucket of champagne and the rest is a blur,” Lance admits.

“Since the day we met, Lance had always talked about writing a children’s book one day,” Jared adds. “So I worked with San Francisco-based illustrator Dan Bransfield to create a book cover. The plot centers around a boy-turned-man and his stuffed bear, which Lance actually has. Throughout the story, both head out on different adventures together—from growing up, to college, to living in New York City, [traveling] around the globe, and ultimately moving out west to California. Getting married would be the next chapter of the story, part of which which would also be finishing the book together. We both envisioned the ending to be the main character ultimately having a baby with his husband and his bear finding a new home in the crib.” When they entered the villa, Jared showed Lance the book cover, and brought him over to the bedroom where his actual stuffed bear was holding the ring box.

“The next thing I remember,” Lance says, “is Jared saying, ‘Would it help if I got down on one knee?’ while opening the Chopard box to reveal the exact ring I dreamed about.”

For their wedding weekend, they chose two special venues—Promontory Winery and The Charter Oak Restaurant in Napa. “We grew up and spent our 20s on the east coast, but after moving out west, we’ve completely fallen in love with the northern California sensibility,” Lance says. He always had a vision of getting married in a loft in Tribeca, while Jared wanted to celebrate in a more open landscape—their final venues worked to achieve both goals.

Lance and Jared share a passion for food, so they knew from the start that their wedding would need to be focused on friends, family, and an amazing meal. To that end, they worked with Ashley Smith Events and The Charter Oak’s Chef Christopher Kostow to put together an unforgettable dinner.

“Because our [actual] wedding took place at City Hall in San Francisco, it was a very intimate and traditional wedding,” Jared says. At that ceremony, they were only joined by Lance’s parents, Evelyn and John, and they continued the celebration with lunch at their favorite restaurant in San Francisco, Zuni Cafe.

“We always knew we didn’t want a religious ceremony [during our wedding weekend],” Lance explains. “So the idea of a chic seated dinner party surrounded by the people we loved felt like the perfect way to celebrate our union.”

Their mission was to have flowers from Wild Club everywhere, alongside an epic multi-course meal by Fogcutter, served with incredible wine at Promontory Winery. They worked with Bourne Paper Co, who did all of the paper goods, to create beautiful books in lieu of traditional menus, which really set the tone for the night.

The dress code called for Creative Black Tie. “We knew that we both wanted to wear tuxedos—mine white and Jared’s navy,” Lance says. “My years at Ralph Lauren and GQ exposed me to many beautiful options, but for us, the idea of investing in a tuxedo to only wear it a few times, didn’t quite make sense. Enter The Black Tux, this innovative menswear rental business that delivered everything we, and many of our guests, needed.”

Lance accented his tux with two key accessories—a diamond brooch from his grandmother, which he wore on his lapel, and his Apple watch, which was meant to symbolize the reason why he moved out west. “I have vivid memories of my grandmother wearing the brooch as necklace,” Lance says. “And while she has sadly passed, it was incredibly meaningful to have her be part of our special day in that way.”

Lance’s parents opened up the evening with a heartfelt welcome to all of their loved ones in attendance, as well as to the loved ones present in spirit. “Before our dinner started, Lance and I exchanged our vows to one another, which were bookended by speeches from a few of our closest friends,” Jared remembers.

“During the welcome greeting by my parents, around the beautiful circular water structure, my mom concluded her part by saying she was ‘excited to call Jared her son,’” Lance shares. “For many reasons, that single sentence meant the world to us. Looking at my beautiful mom and handsome dad, throughout the night, acknowledging that I made the right choices in life and everything was going to be just OK, was a wonderful feeling.”

“Everyone says you’re nervous during your wedding, and it’s true,” Jared adds. “Even after being together for 8 years before the big day, it was the most profoundly unique and positive moment of my life.”

As dinner concluded, guests were gifted takeaway baskets that included homemade strawberry jam from Jared, English muffins from The Model Bakery, palo santo, the couple’s favorite kid’s book, The Missing Piece (which is how Lance described his now-husband in his vows), and a custom matchbook which featured a phrase they say to each other often: “Love you. Love you more. Love you most.”

Jared wore Burberry, and Lance opted for white pieces from Virgil Abloh’s first collection with Louis Vuitton. “His appointment as men’s artistic director signaled such an incredible and positive change for the industry, and his ability to mix a streetwear aesthetic with luxury completely aligns with my personal style,” Lance says. “Plus I knew there was going to be a lot of dancing later in the evening, so I jumped at the chance to wear sneakers and a tee shirt!”

The reception had a distinctly different vibe from the previous night in that it was more casual, creative, and gave friends and family an opportunity to really mix. Illustrator Dan Bransfield created watercolor portraits using an iPad Pro and Apple Pencil in lieu of a traditional photo booth, and there was a wish wall area in lieu of a traditional wedding book.

As a late night surprise, a private dining space downstairs at The Charter Oak was transformed into a club, inspired by the iconic Indochine, where Lance spent much of his 20s in New York City. “From the wallpaper to the lights to the decor, we wanted to create a memorable space where our guests could dance the night away,” he says. “When Jared and I first started dating in 2010, we always loved dancing to Rihanna’s ‘What’s My Name.’ It just epitomized that frivolous and exciting age, partying at tucked away bars…It always brings a smile to our faces, and you know a Rihanna song can kick off any party.“

Eventually, everyone at the reception was out on the dance floor jumping around and screaming the lyrics to Robyn’s “Dancing On My Own.” “It was pure joy,” Lance says. “And the ultimate realization that we were not alone, because we all had each other.”