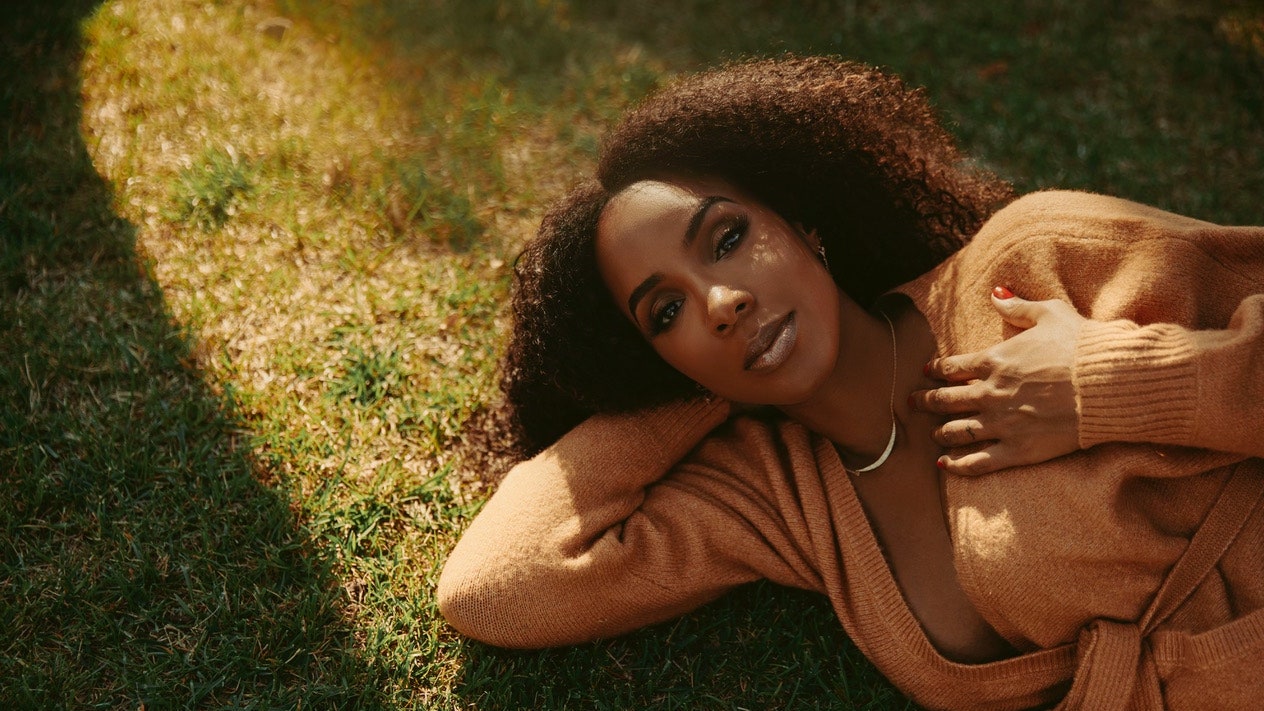 Kelly Rowland knows the power of statement hair. When she moved to Houston to join Destiny’s Child, Beyoncé’s mother Tina Knowles relaxed Rowland’s hair and gave her that iconic pixie cut that showed off her cheekbones. “I felt so unique, and one of a kind, because out of the four ladies, I was the one with the short hair,” she says. “Now, we’re in a place where you can buy five different hairstyles, and be five different girls if you want in one day. Hair, to me, is about expression, and being able to have fun with it.”

But Rowland didn’t always feel such coiffed confidence. “When I was a kid, I remember my hair being super, super long, and super, super thick,” Rowland tells Vogue over zoom, clad in an oversized  caramel sweater (her favorite piece from her new collection with JustFab) that seems to further accentuate her pregnancy glow (she’s expecting her second child with Tim Weatherspoon). “[But] just as quick as I had all this hair, it all left after I got a perm,” Rowland recalls. The process of growing it back out came with new obstacles. “I went to a predominantly white school, and was comparing my hair, my texture to other kids’ hair,” she says. In retrospect, she says with a laugh, “braids would’ve been a great alternative.” But Rowland didn’t see braids in magazines or on TV, or when she did they seemed out of reach. “I was looking at Janet Jackson’s hair, and I would say to myself, ‘That’s just not attainable. I know she paid a lot money for that.’”

Rowland’s love for her hair started to grow when she did finally get a set of her own braids, done by her aunt. “It was this big, beautiful, sprouted, braided style that she did that I absolutely loved, because I could swing that ponytail, honey,” Rowland says, motioning a hair flip with a laugh.

Through all her hair transformations, the biggest lesson Rowland has learned is “no one dictates who you are. Your hair doesn’t dictate who you are,” she says. “Your soul and your character does.” That self-confidence leaves room to play. During pregnancy, Rowland has been experimenting with her look. “I’ve changed up my hair so much already,” she says. “I had dreads, I had this long, curly, wavy wig situation, but I didn’t like it,” she adds with a laugh. “It was too soft and I’m really enjoying our texture right now.” Recent favorite products include Pattern by Tracee Ellis Ross. “Everyone knows how much I love her. And Pattern looks so good in my shower,” she says. She also often uses Gabrielle Union’s conditioner. Next, she’s going to be diving into TPH by Taraji’s line.

Rowland is already plotting the next phase of her hair journey—she plans to cut her hair off again when she turns 50. “I’m so excited for that day,” she says. “I was really inspired by Tiffany Haddish. My husband told me not to get any ideas, but I told him, ‘excuse me? I’ve got all the ideas.’”

In addition to her haircare, Rowland is making a point to turn the TV off and put her phone down as a part of her self-care regimen. “Especially being pregnant now, I just really want to be conscious of that, so that I’m not adding extra stress and shooting my cortisol levels up so high,” she says. “We’re in the midst of an election that’s life or death,” she says, “so we have to remember to stay sane, stay healthy and to lead with kindness. If our leader isn’t showing those things, it’s really important for us to be that example.”