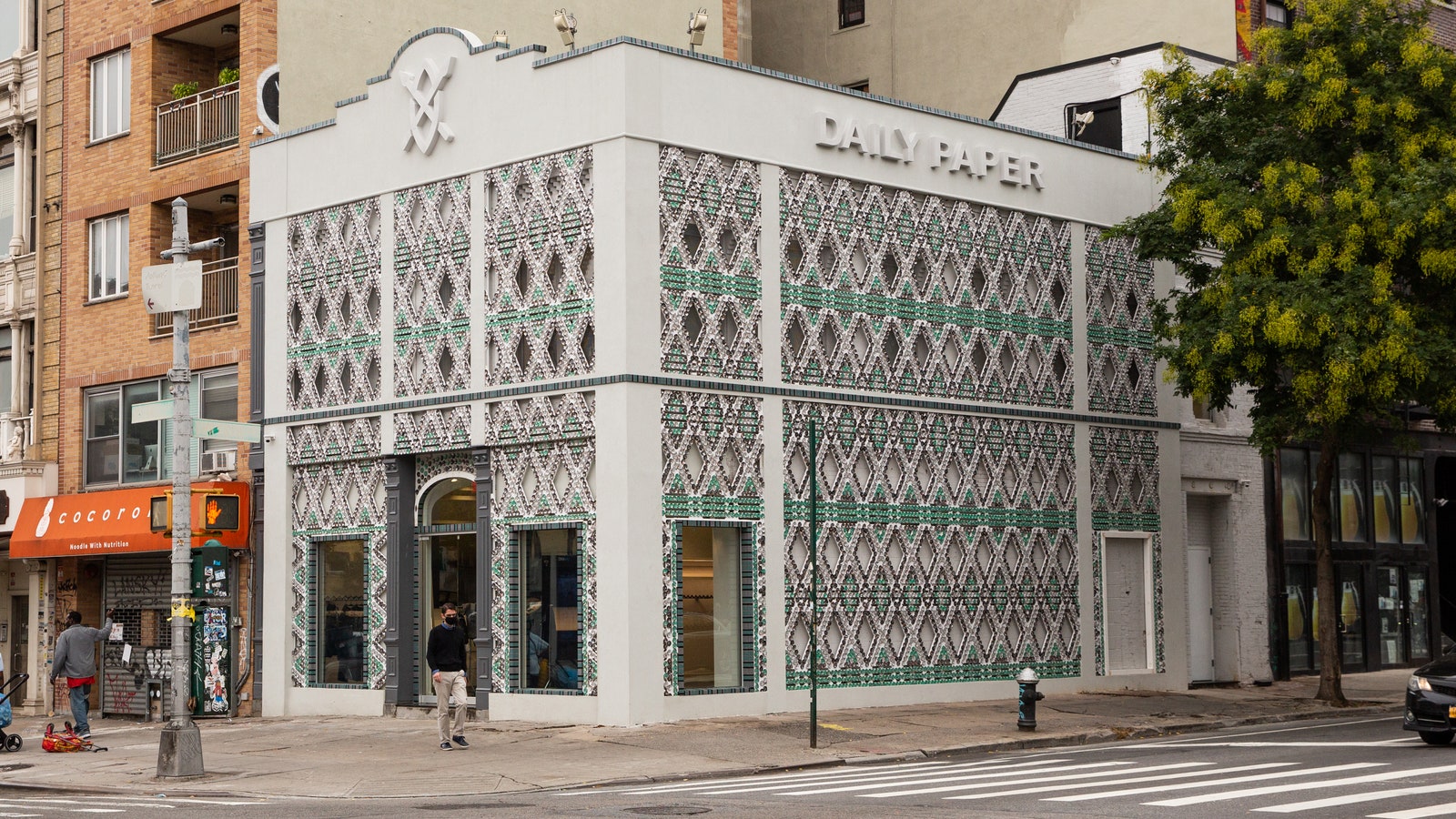 This is not the most ideal time to open a physical store. Retail has revived itself over the last few months, as COVID-19 restrictions lifted around the world and bricks-and-mortar establishments started allowing small numbers of masked customers to shop in-person. But with the number of cases rising again in many places, there’s fear that we may be “enjoying” the holidays from the confines of our homes.

The guys at Daily Paper are more optimistic than that. Hussein Suleiman, Abderrahmane Trabsini, and Jefferson Osei all were born and grew up in Amsterdam’s Old West neighborhood and launched a fashion brand from a blog they started as kids. Their messaging is inspired by the African Diaspora, Afrofuturism, and their roots (Suleiman’s family is Somalia originally, while Trabsini’s family is Moroccan, and Osei’s family is from Ghana originally). Blending traditional and contemporary viewpoints, their clothes have earned them famous fans like Lil Nas X, Keke Palmer, and Anderson Paak.

Up until last Saturday, Daily Paper had only two store locations, both in Amsterdam. Over the weekend, Suleiman, Trabsini, and Osei opened a massive New York flagship on the Lower East Side. Suleiman moved to New York two years ago to hunt for locations and fell in love with the two-floor building, a behemoth by Manhattan retail standards, at Chrystie and Delancey streets, two doors down from the Bowery Ballroom. The original building, looked like a “papier-mache construction,” Trabsini says, “like if you were to push on it lightly it would fall down, but we all believed in it.”

They completely gutted the space and cultivated a bold design with the help of interior architect and designer Heather Faulding of 4plus Design. The outside of the building features recycled Arizona Ice Tea cans repurposed into embellishments meant to mimic the look of traditional African beadwork. The marble mosaic greeting visitors at the front door features a rendering of a constellation of stars that formed the day that Daily Paper was officially launched back in 2012. Many of the materials used in the store are upcycled or recycled, including signage featuring a map of the U.S. made out of old newspapers and the bamboo that lines the ceiling on the first floor. The founders created Dutch gables on the facade, as an ode to their home country. Inside, work from various African artists is displayed. There is a coffee and juice bar, and they plan to build out the rooftop. They want to foster the same kind of gathering place and close-knit creative vibes that their fans and followers experience at their stores back home. “It’s a big bridge from Amsterdam to New York,” Trabsini notes. “What we’ve built in Amsterdam throughout all of these years, we want to do the same thing in New York.”

“Before any of this happened—the pandemic, the social justice movement, the election—we were thinking about ways to bring people together,” Suleiman says. “Stores can’t only be retail spaces. We have to actually try to create as many conversations as possible. Sometimes, I call this our embassy because it’s literally a place that we have outside of our home country that represents our values and what we stand for.” The Daily Paper founders are hoping to create a welcoming space for “like-minded people to talk about like-minded issues.” But it’s also about their team learning from the locals. “We’re guests in the city,” says Suleiman, “so we want to interact with the right people, learn from them, and create a community hub for people to come to our store and create something special and something genuine.”

Suleiman, Trabsini, and Osei are eager to inspire other young Black creatives. “For us to be one of the few Black-owned brands in New York to have a store, why is that?” Suleiman asks. “I want to be part of this conversation, but I also want to be a part of figuring out how the next generation of creatives coming from New York can do what we’ve done. It should not be like this.” As Osei puts it, “there has to be a place for the Black community in Manhattan and the Lower East Side is the best place.”

On opening day, Suleiman, Trabsini, and Osei welcomed fans of the brand and curious locals, some of whom thought the store was going to be a museum when it was under construction. If it wasn’t the party they’d long hoped for—the guys said they were going to fly in their friends, family, colleagues, and collaborators, and really blow it out —there was plenty of excitement. Suleiman talked about potential collaborations and the pop-up concerts he’d like to do with the Bowery Ballroom. Whatever happens with the pandemic in the coming months, with the Daily Paper crew in the picture New York retail isn’t dead.