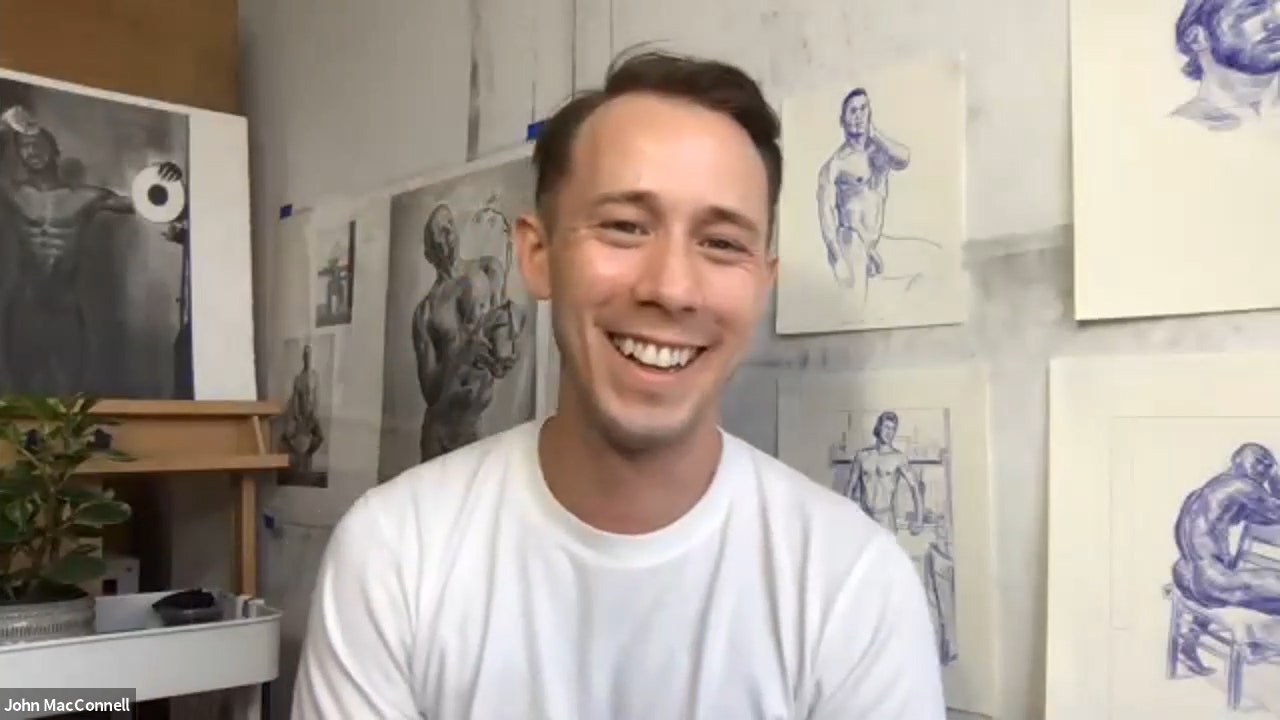 Since early spring, when it was clear the COVID-19 pandemic would keep museum visitors away from IRL art, museums have had to facilitate digital interactions between the art-viewing public and the works that they house. For Florence’s Uffizi Gallery, that meant getting onto TikTok with riotous clips that showcased the centuries-old institution’s sense of humor. For the Met Museum, virtual visitors could tour the world-famous galleries via video. And for the Museum of Arts and Design (or MAD)—a curved building that fortifies the shape of Manhattan’s Columbus Circle—it’s been weekly programming, streamed through Zoom and hosted by the museum’s Luminaries committee, which has helped foster engagement.

“When COVID-19 happened, I knew we needed to keep connecting with artists, so Luminaries Live was born. I just opened my phone and started texting every artist I know and Shantell Martin said yes immediately—before we even fully had an idea what the program would be,” said Alexander Hankin, MAD Luminaries co-chair. “It’s been amazing—Zoe Buckman, Nick Moss, Simon Haas, Ashley Longshore, Brendan Fernandes, and so many more have all said yes.”

Alongside fellow committee members Timo Weiland and Christina Senia, Hankin has welcomed guests including Shantell Martin, Cynthia Rowley, Johnson Hartig (of Libertine) on Luminaries Live, a weekly hour-long program that will run through July 23rd. It’s programming that feels like a casual catch up with the guest artist/designer; the conversation is colloquial, the tone is unpretentious, and the hour escapes before you know it.

During Martin’s programming, the artist (who was recently lauded for publicizing a questionable email she received on the topic of Black Lives Matter) hosted a follow along sketch tutorial that allowed viewers the chance to create a Martin-esque line drawing. “Can you only draw stick figures? That’s great, me too, let’s draw stick figures,” she said, affirming the audience that creativity needn’t be hindered by perfection. The program echoed some of the London-born artist’s performative-pieces—which in their early days, unfurled to the music thumping out of speakers at Tokyo clubs. “A lot of the work I create is founded in collaboration and I think that’s probably the most rewarding aspect as not only an artist but as a human being,” said Martin on the drawing tutorial and participating in the MAD program.

Also on the lineup from weeks’ past was Cynthia Rowley, who was fresh from debuting her new collaboration with sunglass-maker Zenni. The lenses are as color-splashed as Rowley’s ready-to-wear pieces and Hankin even opted to sport them during the virtual conversation, which delved deep into Rowley’s early days studying at the School of the Art Institute of Chicago. “It’s perfect timing for the MAD museum,” said the designer, “the world sort of became ready for their message—craft and learning about the creative process.” Throughout her discussion, she answered rapid-fire 73 Questions-style prompts. What would be her invented crayon color? Rainbow, but of course.

This past Sunday, a special Luminaries Live was hosted in celebration of Pride, with artists who identify or deal in the subject of queer art: Simon Haas, John MacConnell, Stuart Sandford, and Brendan Fernandes. The hour-long event took place at 12 p.m. sharp and began with a cocktail-making tutorial lead by Miss Cookie D’Lite, who announced that her new pink locks were sported in honor of her 1-year dragavesary. (The cocktail seemed inspired by its maker as the recipe called for vanilla ice cream, three chocolate cookies, and some Kahlúa.) “Happy Pride!” co-hosts Hankin and Weiland welcomed the group, who were all likely gearing up for a day of marching to follow.

Throughout the hour, the conversation ping-ponged between the four artists on matters of queer identity and Instagram censorship. Shared and differing experiences were evident as each responded to the questions dolled out to them.

Haas, one half of the Haas Brothers, explained, “I work primarily with my brother on not queer art, but I studied painting and initially wanted to be a painter…I always had this deeper longing to do art that was more personal.” Haas continued to share some works which were conceived and completed during the pandemic. “I was trolling around Google street view trying to find images of queer longing in them.” He happened upon a beachy photo of two young men which he then illustrated on his iPad—a techy medium he cites David Hockney for inspiring him to use.

MacConnell, who is known especially for his Instagram feed on which he disseminates his portraits that feature like-minded queer men (many of whom he meets via social media), explained how his process fosters queer connection. “A lot of people who know each other through Instagram never meet, but I get to take that further. I have people here [in my studio] for 2-3 hours and it really is a time to get to know people and really connect.”

Sanford, an interdisciplinary artist whose medium ranges from sculpture to photography to screenplays, explained, “I became a queer artist because that was what I was. I was queer and I was making work, so it was a natural thing for me to do.” During the call, he presented photos of some of his sculptures—a striking bronze that displayed the male figure in all its glory was the result of a 3-D body scan 3-D printed into a mold and then cast in bronze. “I’m interested in the marrying together of technology—from the classical all the way up to the contemporary.”

Brendan Fernandes, the mastermind of Ballet Kink—who put on an incredible performance at the last Guggenheim Young Collectors Party—also joined the panel, speaking on the tension that comes along with celebrating the male body and the historic submission of the ballet dancer, which is inherent to the art form.

Toward the end of the event, performance artist Héctor Cerna appeared and sort of brought the conversation to life, moving and torquing his body gently to be sketched by Senia—who presented her work at the close of the “brunch.”

Whilst speaking on all things queer art, it was relevant to consider if the label was one that was embraced or tolerated by those who wear it. Per Fernandes, “I like the moniker of queer because it’s open and it means so many things. It’s fluid; it can be one thing today and one thing tomorrow and that’s what I am.” Sanford added, “I think in a perfect world, we would just label ourselves artists. But we live in a world that’s far from perfect. So to label ourselves as queer is very important because of that visibility. Hopefully one day, we won’t have to do that, but for now, we definitely have to do it.”

And on that note—lest anyone had forgotten—there was a March going on downtown that everyone had to join—in spirit or otherwise.